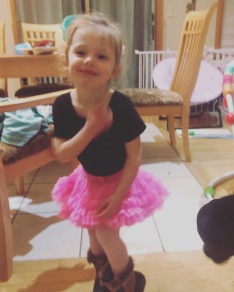 When I first found out I was pregnant with Juliana I was freaking out because it wasn’t exactly planned. Howie and I got married in June 2014 and went on our honeymoon in July. I got off birth control right after our honeymoon and was convinced it would take me years to conceive. I lost so much weight from running that I didn’t even think I could have a baby. Then in October at work I got a call from my midwife who just did my blood work because I never got a period after I stopped the pill. She said, “Oh I have some great news. You are pregnant!” What in the actual F?! I didn’t even know what to say or what to do. I felt like I was going to puke. I don’t even remember saying goodbye to the midwife. I always imagined telling Howie in a cute way, but I was so caught off guard I just had to call him. He was at breakfast with his brother-in-law when he found out he was going to be a Dad. I also called my mom, dad, and brother in Myrtle Beach. I called my best friend/sister-in-law. I called my co-teacher who wasn’t there that day. I also called Howie’s parents to let them know they would be grandparents. I felt bad after for calling them instead of telling them in person, but I think if this was all planned I could have waited and done something way cuter.

My pregnancy was pretty healthy for the most part, besides eating a million pumpkin muffins in the first trimester. I felt energized, I never got sick, I kept up with teaching Zumba and even ran 5 miles into the second trimester. BUT I got major cystic acne and melasma. I was very self-conscious about my skin, but I was very thankful there were no complications during my pregnancy. I do remember being a little sad when I found out we were having a girl because I was petrified to have the same relationship I had with my mom when I was younger. I was also excited for a girl because one day we can get pedicures and go shopping. I gained exactly 23 lbs and stayed very active throughout the pregnancy. We picked out her name right after we found out she was a girl. It’s rare that Howie and I agree on things right away, but we both fell in love with the name Juliana. I really did have a flawless pregnancy.

The actual birth story: I was due July 3, 2015. I taught Zumba and went to HIIT until I was ready to pop- it wasn’t pretty. I definitely couldn’t run anymore. I remember our students’ last day of school was June 18 and I was still going strong. I couldn’t wait to be done with the school year so I could go home and lay out by my pool and get tan before having my first baby hahaha. I woke up Friday morning, June 19 with weird stomach cramps like I had to poop, but couldn’t. I went to work to clean my classroom with my co-teacher and told her I felt weird. Everyone kept saying the baby was coming and I was in labor, but I wasn’t convinced at all. I literally felt fine, just had to poop. One of our secretaries gave me a back rub and kept telling me the baby was coming. I went back to my room and bounced on a ball while everyone and their mother laughed at me and told me I was in labor. My principal came on the loud speaker and told me to go home but I didn’t.

I went home at the normal time and got ready for my usual HIIT class on Friday nights. Yeah, that wasn’t going to happen because now the poop feeling was coming and going and if I did any squats I might shit my pants. I went to Renee’s house to walk and get Chinese food…gross now that I think about it. We ate dinner and hung out outside with my in-laws wihle the contractions were coming and going, but I didn’t want to tell anyone. The night progressed and I still felt good enough to laugh and hang out. Renee came over our house because the boys went out to eat and ya know, we had no kids at the time so we went to my house to wait for them. The boys came home around 9pm and I actually started feeling pain in my butt…literal pain in there. Howie kept telling me to call the midwife on-call but I remembered our birthing class and they said 5-1-1; meaning the contractions needed to be 5 minutes apart for one minute lasting an hour. Mine were inconsistent but coming stronger. Renee and Josh went home, but were on standby. I drank some tea and took a bath in the jacuzzi and holy mother of pain. Howie kept telling me to keep calling, but I knew Julie, the midwife who was really sick at the time, would tell me to wait it out. When I got out of the tub, I lost my whole mucus plug and immediately called my mom. I still wasn’t convinced this baby was coming because I’ve never been through this before so I didn’t understand how this whole process worked. Plus I always heard that first babies are usually late. Around midnight, we decided to head to the hospital to get checked. I think Howie was actually worse off than me.

We got to Baystate around 1am and checked in while I was moving my hips in circles to ease the pain. I remember I had a pretty nice tan at the time. The contractions were definitely getting stronger and the plug was just pouring out. This weird lady with a stone face checked me for dilation which was not fun at all. I actually was never checked for dilation because I was 38 weeks that day and Baystate usually doesn’t check patients until about 39+ weeks. I was already 6cm! I remember calling my parents at around 130am and my mom screamed they were on their way haha. They hardly even answered the phone before I even said anything. They admitted me right away and sent me up to Labor and Delivery. By the time I got up there, Julie checked me and I was 8cm. My water broke all over her hand. I begged for some type of  relief. I even went in the shower with Howie, but the pain was becoming unbearable; like a hockey stick stabbing me in my back/back labor. Time for the damn epidural!!!! I was so nervous to even get it at 6cm, so my dumb ass waited until I was almost 9cm. My mom didn’t leave my side. This was very special to me because my mom and I didn’t always have the best relationship when I was younger, in fact it still haunts me to this day. But to have her in the room with me while I gave birth was so special for us both. Her and Howie were my cheerleaders and I wouldn’t have had it any other way.

My broken water was all over the floor as I was skating around in it and Howie was trying to lay down! This was all around 3am. The epidural people came and honestly, I hated it. I was so nervous because I had to sit on the edge of the bed and stay still while they did it. But I was having major contractions every 30 seconds and sweating so bad because not only did the contractions hurt, but the epidural needle freaked me out. They had to do two attempts since my contractions were so bad and practically convulsed my whole body. I was more nervous about the epidural than I was pushing a baby out of my vagina. The nurse was amazing. I will never ever forget it and mark my word- one day I will be a labor and delivery nurse because of her.

Around 615a, Julie came by to check on me and low and behold, I was crowning. The epidural worked so magically that I couldn’t feel a thing. Time to push! I remember, Melissa, my nurse begged me to have this baby before 7 because she was done at 7 and another nurse was coming in. They also asked if I could have an intern come help. I agreed, but Juliana was ready to come out right then and there. I pushed some good pushes and she was almost out, but Julie said she needed to make a few cuts so Juliana could slide right out. Gross. Sure just cut my asshole open, no problem. I remember looking in the corner of the room seeing Renee with her stupid lime green phone case. She was coming in and out to give our family updates. The intern never made it.

I pushed one more good push and she came sliding out. I reached down and felt her head and pulled her onto my chest. This. was. the. best. feeling. in. the. whole. world. Pure bliss. It was unreal. Her little strong and fierce cry, I could already tell she was a force to be reckoned with. She was born Saturday, June 20 at 6:46am, right before Melissa was off shift. Juliana latched right away and her little eyes locked into mine. I was in love. In that moment, I felt more love than I ever have in my entire life. I knew in that moment why I was born. After an hour of skin to skin, both our families came in to meet Juliana Marie Coro. The actual process from when I arrived at the hospital to the birth was about 6.5 hours. I must have been in early labor the day before. 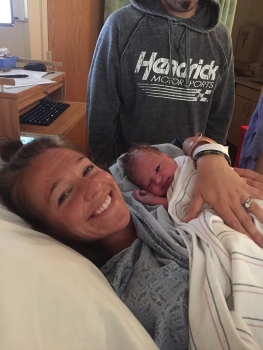 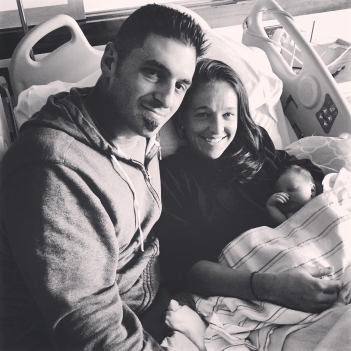 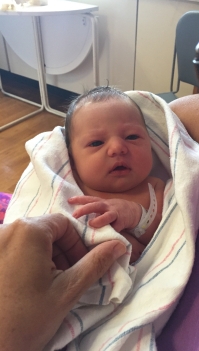 I was definitely sore and the initial postpartum was tough, but was so worth it. My nipples were cracked, bleeding, and raw and my bed was covered in my new milk. I was a pumping, no sleeping, eating, crying machine. There is nothing in the world like having your first baby and I was sad that it was over. I didn’t suffer postpartum depression, but I was weepy as ever for the weeks to come. Around the 5th week after giving birth, I finally started to feel better emotionally and physically. By emotionally, I just mean that I was so anxious about something happening to her now and in the future…normal mom thoughts. I remember having to look at my tattoo when I would get overwhelmed…just breathe. Just breathe mama, you got this. Pregnancy, postpartum, and motherhood is a rollercoaster of emotions, but don’t forget to enjoy the ride.

Hudson’s birth story up next…